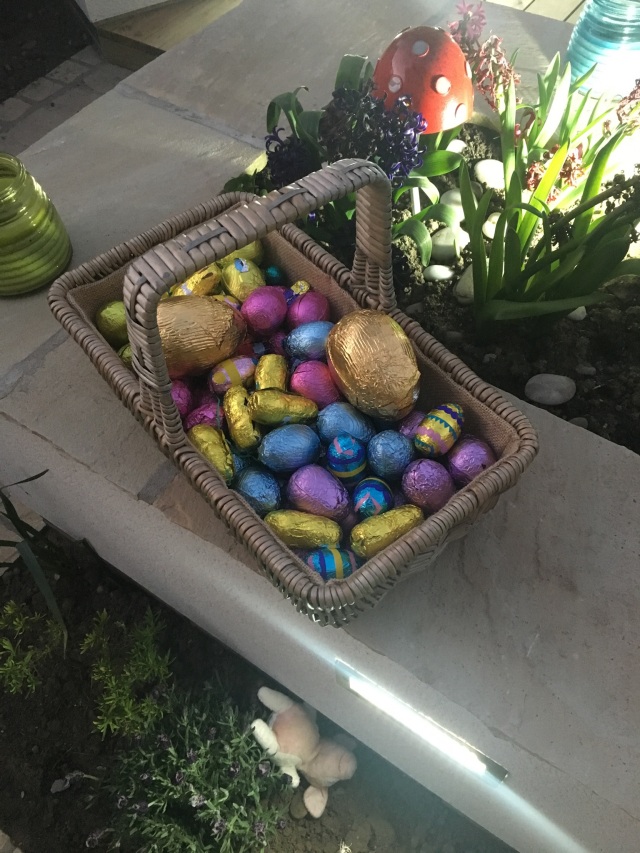 I love the school holidays, I love spending time as a family, I like not having to get lunches ready in the morning, no need to worry about how healthy the snacks are that go into the children’s lunch boxes, no ironing school uniform at 8.30 in the morning (yes that has happened more than once!).

I like the lazy mornings and long evenings spending time outside after the UV has hit zero. Although this Easter break seems to have come and gone in the blink of an eye, it also seems odd that the children have been on a break the two weeks before Easter returning to school on the Tuesday after Easter Monday. At the start of the break Easter felt so far away yet we are now preparing ourselves for normality as tomorrow morning normal service will have resumed. Easter already feeling like a distant memory.

This break has been full of many firsts and we’ve seen both Eddie and Livvy learn so much about themselves. The first ‘first’ happened in the first week of the break, I was driving back from karate lessons with both Eddie and Livvy in the car with me, a cheesy 80’s pop song came on the radio and I turned it up loud, I can’t remember which one it was now. As we sat at the traffic lights waiting for them to turn green I realised my arms were moving involuntary to the music whilst I sang along with the song. I tried to get Eddie to sing along with me but he was having none of it!

‘You’re so embarrassing!’ was his only response to my attempt at getting him to sing along with me.

I could see from the look in Eddie’s eye that he was glad of the fact that we can’t open the car windows due to Livvy being in the car with us, the sun’s rays were pouring down from the skies above us. Opening the windows would have flooded our car with UV light so we sat at the traffic lights with the windows up and the air con and radio on full. If there was ever a time Eddie was grateful that XP had entered our world it was at that moment as we sat at the traffic lights 80s classic on loud with Eddie sinking down in his seat in the hope no one could see he was the one with the embarrassing mother.

Over this Easter holiday we’ve experienced the hottest day of the year so far with temperatures reaching unseasonably high levels. There was once a time that such weather would have left me feeling down and not wanting to leave the house for fear of exposing Livvy’s skin to higher levels of UV light. This year however we used the warmer weather as an excuse to hit the beach, we packed the car full of warm coats and spare clothes.

Warm coats I hear you say scratching your heads, yep I did write warm coats. You see when we hit the beach we don’t head there in the morning and spend the whole day sat out in the sun like most people. We left home well into the afternoon and only arrived a few hours before sunset. Although it’s warm in the day time, this time of year temperatures can really fall low at night which is why we need to take our warm coats with us.

What we learnt from our trip to the sea side was that if you want to miss the miles and miles of queuing traffic on the hottest day of the year then make your visit at night.

As we got closer to the beach we had to smile at the amount of traffic leaving the area, every round about had miles of traffic backing up, everyone clearly having the same idea and having spent the whole day at the beach were now all leaving at the same time blocking all the roads as we flew past them all in the opposite direction. It’s also the best way to get the whole beach to yourself, and when I say the whole beach I mean the whole beach! Not a soul in sight, just a small group combing the beach with metal detectors looking for treasure. The tide was on its way out as Livvy slipped her shoes off revealing her toes to the cold sand and salty water. A perfectly perfect night.

Another perfect night happened during the first week of our Easter break as we welcomed many friends into our night garden for a night time Easter egg hunt. After eating pizza and chips the girls played in the safe light of our garden den whilst the boys played football in our neighbours garden (which we have a secret gate for easy access). When the UV levels reached 0 out came Livvy with Eddie by her side and all their friends for the best Easter egg hunt as the moon lit up the night sky. It’s always lovely to see Livvy’s friends treating her so normal yet taking her needs into account, not moaning about having to stay within ‘safe’ areas of the garden they knew as soon as it was safe they could explore the whole garden with Livvy by their side. I’ve said it before and I’ll say it again the key to Livvy’s future is her friends, it so important for her to have understanding friends that will help to guide her safely though life’s ups and downs and even at this young age spread their love and understanding far and wide to allow a normal, as normal gets, childhood.

The most valuable lesson came in the form of a Ben and Jerry’s ice cream tub. Way back when lent started, Livvy decided on her own that she was giving up ice cream for lent, we supported and encouraged her by saving our ice cream indulgences until after she was in bed, even Eddie waited till she was busy playing with something until he asked if he could have an ice cream as not to tempt her. Once lent was over Livvy was excited to get stuck into some ice cream, we let her choose any flavour she wanted from the supermarket. Strawberries and cream Ben and Jerry’s was her choice. Movie night started as she pulled the lid from the pot, her eyes wide with excitement, spoon in hand ready to dive straight in, ‘can I have all of it?’ She asked expecting us to say no, ‘of course you can, you’ve done so well over lent’ she couldn’t believe her ears as she started eating her way through the tub, half way down the tub she started to flag and the spoon wasn’t moving with as much determination as when the lid was first pulled back to relieve the tasty ice cream. ‘I think I’ve had enough’ she announced. It was a good attempt but the full tub had beaten her on this occasion. There was definitely a lesson to be learnt there and I don’t think I need to say anymore on it!

We’ve also had a sad time this Easter as Eddies beloved Guinea pig Twinkle passed away very unexpectedly, to say Eddie was heart broken is an understatement. It’s hard having pets and children as the inevitable will happen due to the pets short life spans. Having said that I’m a big believer in allowing children to have pets, it helps them to develop their empathy, it gives them a responsibility over another living thing, it gives them someone to talk to when times are hard and talking to mummy and daddy just isn’t enough. It also teaches them about life cycles and that with life comes death, we can talk openly about death in a true and real sense before they as children experience it in the real world. It’s been a tough emotional week for both Eddie and Livvy, but more so Eddie as Twinkle ‘was like no other piglet and can never be replaced’ as Eddie told me whilst sobbing into my chest.

There’s been so many great experiences these past two weeks, mainly fun happy ones, we’ve all had a great time and wish we had another week to carry on our fun but as we all know all good things come to an end. I just want to share one last story from our Easter break, it happened whilst we were on a play park out in the fine Derbyshire countryside.

Phil and I sat drinking a cup of tea whilst we watched both children play on a large climbing frame. Livvy of course was protected from head to toe, with her visor and gloves on so no part of her skin was exposed to UV light. Two older boys took an interest in her attire and found it rather funny, pointing, laughing and mocking. We sat and watched for a while knowing that Livvy has to at some point start finding her own way to deal with these types of situations. After a few minutes Phil couldn’t sit back any longer and walked over to the boys and Livvy just as they asked ‘what’s that on your face?’ In a mocking tone, not a friendly inquisitive one. Phil didn’t see that Eddie was close by and as he approached and spoke to the boys Eddie fired back, ‘what’s that on YOUR face?’ A perfect nine year old response to a situation that was running away with itself, twisting out of control not knowing what to say to help his little sister from older boys bullying her, he just simply threw their own question back at them.

Phil said to the boys in an authoritative manner, ‘she’s allergic to the sun and will get skin cancer if she takes it off’ both boys faces dropped, jaws hitting the floor as they apologised to both Phil and Livvy. When Phil sat back down next to me he told me what Eddie had said, we know that as much as Eddie and Livvy fight and bicker he will always have her back, he’s the only one that has the slightest idea what it’s like being Livvy, being a child and living with xeroderma pigmentosum. He is her rock and her protector.

We’ve got a tough few weeks and months ahead of us with our next hospital visit fast approaching and changes happening within school. Having family time together over the Easter break has allowed us all to reset our batteries take our foot off the accelerator and appreciate each other and the fun times we have together. We all need a break from normality and the constant battles we face whilst living as we do and this holiday has given us that time. After I drop the children at school in the morning I’m straight into a meeting at school to discus many things associated with Livvy’s care, straight back into our life living with xeroderma pigmentosum, I think the lessons we’ve all learnt over the last two weeks will help us all to face the challenges coming our way.

One thought on “Easter Holidays”