Whilst the stars watch over her 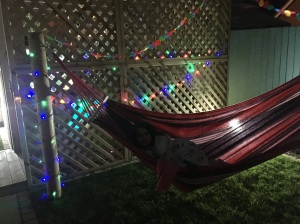 As the last rays from the autumn sun dip down under the horizon, one little girl is getting ready to explore, getting ready for an adventure like no other. In one night she can watch rockets fly across the night sky. Waving to the ISS as she tracks it for those short few minutes when it enters the tiny speck of space that is visible from the vast mysteries and wonder that is the universe. A huge blackness full of the brightest stars waiting to be explored, only showing their true beauty at night as the sun sets leaving all that dare to look toward the night sky gazing in wonder and awe. All this mystery whilst lying in a hammock made just for her. A hammock made for star gazing with her brother, not the type you would find on an abandoned desert island, although if that’s where she wanted to travel in her dreams then what better way to fly there than in the freedom that our garden has given her. A freedom like no other.

In one night she can feel so many textures for the first time in that day. As others are getting ready for bed and drawing an end to all new experiences for one day our girl along with her big brother are getting ready to hunt for bugs under fallen leafs, splash in flowing water wetting everything around leaving wet footprints as they go. They can sit under blankets and talk of nothing but the simple pleasures of being a child, a world away from hospital visits, skin cancer and surgery.

Warming her hands with a mug of hot chocolate as the warm steam drifts up to her face and warms her cheeks from the autumn chill in the air, the marshmallows floating and slowly giving into the warmth of the chocolate as they surrender themselves and melt away into the night.

The water from the fountain runs down over her fresh finger tips, reaching out to explore the cold, a sensory overload with no gloves standing in their way. The water trickles over the back of her hand and finds the crease of a forgotten scar, the water pools and swirls on the scar before continuing on its journey reaching her elbow before dripping onto the wooden decking that her bare feet stand on. The scar maybe an old battle ground long forgotten, only held in the memory of the few that saw, the few that felt the pain, the shared tears as the realisation of living with xeroderma pigmentosum once again hit our hearts and Livvy’s skin. As the moon light shines on the water pooling on her scar it just confirms the importance of the garden, the need to have a safe space under the sky with nothing in between the skin on her face and the big open vastness.

Fairy lights sparkle against the blue fence like a back drop to a magical wonderland, welcoming all that wish to enter. Small fairy doors hide down below with biscuit crumbs sprinkled all around, any day now I’m sure a fairy will move in, how could any fairy resist the constant offerings from Livvy and Eddie as each night they go out to offer new treats and clear away fallen leaves and wipe clean the doors. As the moon light shines and the stars twinkle up above the most magical fairy world, it truly is a world away from protection from the worry of exposure and the constant pain of not being like other children.

The local bat sweeps and swoops with elegance and grace, silently patrolling our garden hunting for bugs attracted by the soft glow of the lights that surround our night garden. We may miss out on so much during day light hours, but we get to see the other side of the earth, the side normally hidden out of sight only lit by the moon, a place full of shadows and unfamiliar sounds, this side of the earth has become our safe place with the help of our night garden creating the most perfect playground for adventure and allowing dreams to become a reality.

Taking centre stage in the garden stands a pergola with its own entrance, clad in trellis which in time, night flowering jasmine will engulf, creating a scented, secret world, a world that hides its true wonder until dusk.

The coloured decking lights help to create the perfect stage for any production or dance show put on by Livvy as she embraces the outdoors in her bare feet and creates a world like no other, no place on earth gives her the freedom like our night garden, a space where every night with one flick of a switch water starts flowing, lights of all colours begin to shine and safe lights allow the garden to be flooded in soft light casting shadows of fun, excitement and new adventures. It’s a million miles away from those long summer days spending day after day inside the safety of the house, where playing free out doors really was a dream, a dream that felt untouchable, unachievable.

It’s taken a long time to achieve but it’s been worth the wait and as another surgery looms over us next week we know we will make it through the surgery and no doubt as soon as we return home Livvy will lie on a hammock under a blanket for warmth allowing the day’s thoughts to process in the peace and safety of our garden whilst the stars watch over her. 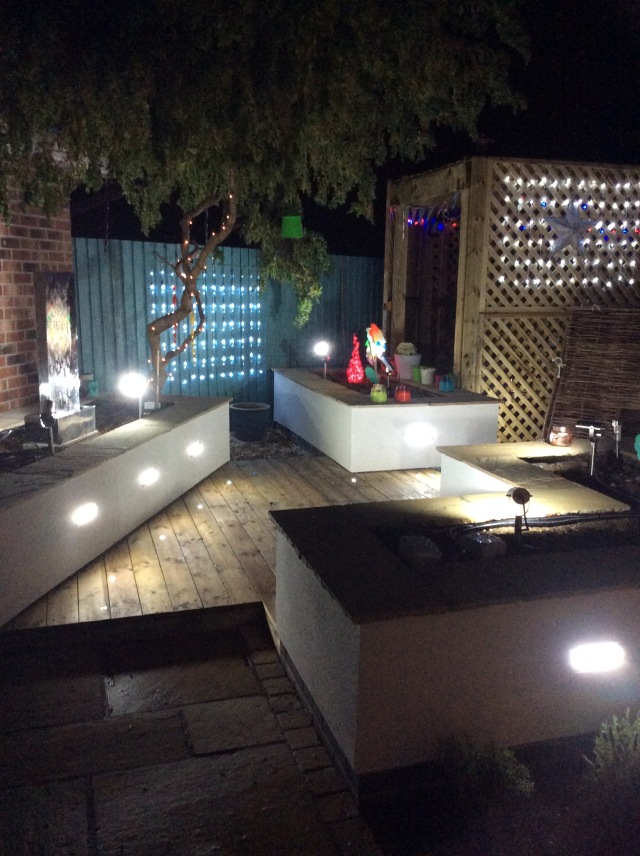