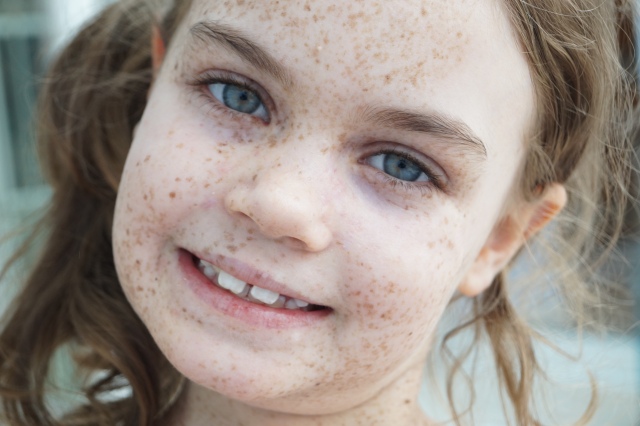 It’s no great shock to go out for the day with Livvy and have her stared at by almost everyone that passes her by. It’s not something that anyone can get used to but I guess over the last two years I’ve become less inclined to question someone’s stares, not because it doesn’t annoy me immensely but because I would do little else but argue with the general public about their rudeness the entire time I was out with Livvy.

The best one was over the summer holidays, we had gone out for the day with my mum, the children were walking a little ahead of me with their grandma. We passed two older ladies and a man, one lady turned to her associates and passed judgement on Livvy’s attire right as she walked past me! I don’t think she realised that I was Livvy’s mother. I turned and in a very abrupt manner told her that she is my daughter and she can not be exposed to sunlight and she also has skin cancer. The lady in question turned round smiling ‘oh really???’ Like I was some sort of deranged person that had been let out of the asylum for the day. ‘Yes really! And we don’t appreciate such rudeness from strangers’ I quickly turned held my head up high and went to find the children who were now in a shop with grandma, I left the woman outside shouting angrily ‘I wasn’t being rude’ she was truly amazed and quite clearly upset that I had called her rude. The people in the shop had heard what had happened and it was quite funny to see them all trying their best not to look at Livvy for fear of my reaction. Eddie was grinning from ear to ear as if to say my mummy rocks!! Livvy appeared oblivious to what had happened and was more interested in what the shop was selling.

I learnt two things from that experience, one – rudeness can only be judged by the victim, she may not have set out to be rude or offensive but her comment left me feeling like someone had punched me in the stomach and taken a chunk out of my heart. And second, there’s no point arguing with people in the street who will go on to stare at the next person that may not fit in with society’s ‘normal’ appearance.

Yesterday Livvy and I went shopping into Nottingham, we spent the afternoon looking at all the Christmas ranges that are popping up in the stores, Livvy was in her element asking when we were putting up our tree.

No shopping trip with Livvy is complete without calling into lush, I think it is without a doubt one of Livvy’s favourite shops. She walks round picking up every soap and bath bomb and bringing it to her nose for a sniff, every bowl of water with a recently used bath bomb in she dips a finger in and swirls it round, it’s a sensory overload! Livvy is very tall for her age and at times confident, the shop assistants, see her picking up bomb after bomb and always engage in conversation with her Livvy enjoys telling them which ones she’s already tried at home and which are her favourite.

After some time sniffing and chatting Livvy had selected a bath bomb for herself and one for Eddie, ‘can we have a face mask too mummy?’ I love a lush face mask so I couldn’t say no. We found ourselves by the face masks, which for anyone that’s not used one before are made with fresh ingredients and must be kept in the fridge, in store they are kept on a bed of ice. Livvy dived in with two hands feeling the cold ice on her bare hands whilst I held out the face masks for her to sniff, we decided on the days choice as Livvy pulled her hands out dripping with cold icy water. A shop assistant saw her and came over to offer a towel for Livvy to dry her hands.

Livvy turned round to face the girl helping her to dry her hands, the girls reaction to Livvy was one we’ve not experienced before and left me with a lump in my throat. She was mid sentence saying something about how fun the ice was when she saw Livvy’s face for the first time, Livvy’s appearance took her breath away, ‘oh my, you are beautiful. Wow. You are gorgeous, your freckles are stunning, like a perfect little fairy’

You can imagine the grin on Livvy’s face, she didn’t say anything just smiled as she dried her hands. It was the first thing she told Phil when we saw him later on ‘daddy the lady in lush said I’m beautiful’

It made such a lovely change to hear a positive comment from a stranger. It doesn’t make up for all the negative comments we get but it sure does help. It’s rare for someone to see beyond her scars, to see Livvy for what she is and not what XP has made her. If only more strangers could see beyond the mask and scars and see that there is a girl behind the protection, a girl with feelings, a girl trying to fit in, a girl trying to be normal in a world that wasn’t made for her. 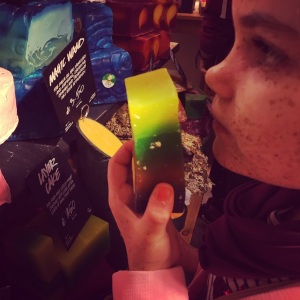 2 thoughts on “A Perfect Little Fairy”